All that time, women had a good alternative to the real thing, while men were left rubbing their penises against rocks or banging fake, soft creatures.

Men have been watching girls shove anything: from shaped wooden sticks to leather-wrapped stones into themselves. There were a few worthless pocket vaginas that came out, but none were good enough for consistent use. It wasn’t until 2001 that men finally got their first real lifelike alternative.

I’m talking about the Fleshlight.

The Fleshlight has been on the market since 2001, and I still meet guys that don’t know it exists. I’ve been using mine as a real girlfriend for the past couple of years, and needless to say, we are getting very close. Boredom sometimes dictates rubbing out a quick one, and my sock “Emma”.  But for those more intense, prolonged sessions, there is nothing like the Fleshlight. 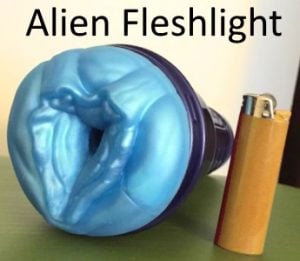 It is sold in almost every skin tone you want. There is even a blue one for us geeks that wish nothing more than to have sex with that blue woman from Avatar.

The openings (where your penis goes) have a choice between a traditional vagina, a lifelike human mouth, or even a butthole. The Fleshlight’s interior comes in varying levels of textures and tightness to really customize your masturbatory experience.

Over the past couple of years, Fleshlight has taken things to a whole new level. They started making moldings that look exactly like the orifices of famous adult stars.

So, whether you are still jerking off with your hands or rubbing your penis on strangers on the train, you must get yourself a Fleshlight. Your penis will be glad you did.

Find out more about the Fleshlight: read our review.