Sikhism: beliefs about love and sex 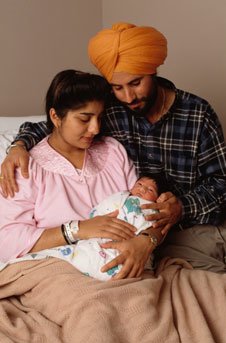 Chastity is a crucial part of Sikhs’ teachings because the divine spark of the God, Waheguru, is present in every person’s body – so the body must be kept clean and perfect.

Anything that may potentially harm the body must be avoided. Sex must be restricted to married couples. Pre-marital (prior to marriage) or extra-marital (outside of marriage) sex is forbidden.

For Sikhs, marriage is viewed as a commitment before Waheguru.

The main purpose of marriage is help on their spiritual path and companionship, as opposed to sexual enjoyment.

A married relationship is sometimes expressed in the phrase ‘a single soul in two bodies’. Being faithful to a wife or a husband is crucial to Sikh life. Monogamy is one of the main rules in Sikhism.

A married couple is free to control their personal sex life. Some Sikhs believe that it is an honor to limit themselves sexual intercourse to focus on spiritual love.

Family life is vital: the purpose of every Sikh couple is to conceive and nurture their offspring to contribute to Waheguru’s creation.

Any other form of living is somewhat discouraged, including celibacy.

Homosexuality and same-sex marriages are not mentioned in Sikhs’ teachings. Therefore, it is believed that those are not acceptable. Nothing is mentioned about homosexuality in the Guru Granth Sahib (the primal collection of Sikh Scriptures), while heterosexual marriage is often mentioned and encouraged.

One of the debates against homosexuality is that lust is among one of the five vices quoted in the Guru Granth Sahib. However, some Sikhs argue that this also applies to heterosexuals and that the first Guru’s (Guru Nanak) teachings on universal equality recognize homosexuals and their rights.

One of the purposes of every Sikh is to have love, respect, and no hatred towards any person regardless of color, race, creed, sexual preference, or gender. Therefore, opinions about same-sex marriage and homosexuality are not treated as a subject of great significance.