Tribulus Terrestris is a plant that is commonly used as an active ingredient in testosterone boosters and in a lot of general dietary supplements.

It is a Mediterranean fruit-producing plant that grows in dry climate places and is very common in North America. It is believed that the ones from Bulgaria, Turkey, and Macedonia have the best quality.

Because its fruits, leaves, and roots are used as medicine, Tribulus Terrestris is widely distributed all over the world. It has always been a part of the Indian Ayurveda Medicine and Traditional Chinese Medicine. 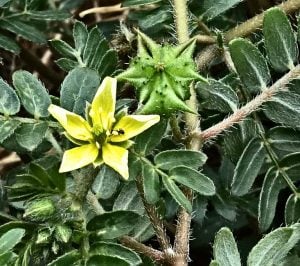 There are not a lot of reported negative side effects brought by supplementing with Tribulus Terrestris. Some common complaints include irregular periods and insomnia.

Because Tribulus terristris affects the blood glucose disposal, individuals who are sensitive to the effects of significant changes in their blood glucose levels may also experience shaking and light-headedness.

This study shows that Tribulus Terrestris may cause kidney damage. There was also a reported case where a healthy man used the extract to prevent kidney stones and experienced seizures. His health went back to normal as soon as he stopped taking the supplement.

It is not safe to take Tribulus Terrestris with medicines for diabetes as this can lead to dangerously low blood pressure.

Tribulus Terrestris can also worsen the negative side effects associated with steroids so we recommend not taking them both at a time.

Tribulus Terrestris has many other extracts, but the most commonly used in male enhancement supplements is saponin protodioscin. As this is a natural ingredient, there is no standard dosage set for it. 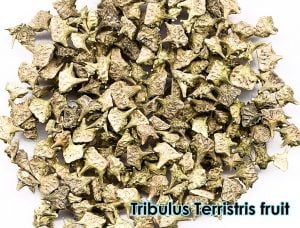 Research and studies for the effects of Tribulus Terrestris used up to 1,000 milligrams a day to decrease blood sugar and cholesterol levels. Libido enhancement tests used at least 250 mg to 1,500 mg a day.

Other studies based the dosages on the subject’s weight. Common dose based on weight is 10 mg to 20 mg per kilogram of weight.

For a 40% furostanol saponins extract, one study used 85-250 mg per day. The total dosage was divided and taken in three separate times during the day.

For a 60% saponin extract, the recommended dosage is between 90mg to 150mg. Experts believe that lower doses work better.

The traditional dose for supplementation that doesn’t use the extract is 5-6 grams of the root powder, and 2-3 grams of the fruit.

Tribulus terristris is commonly used with other natural testosterone boosters, cortisol blockers as well as anti-estrogens.

As a male enhancement supplement, the best ingredients to mix with Tribulus terristris is Vitamin D3, D-Aspartic acid, Phosphatidyl Serine as well as Coleus Forskohlii.

For men who are above 35, adding 200 milligrams of DHEA will boost the effectiveness of this supplement.

This supplement is commonly marketed to men who want to improve their sexual health as well as those who want to boost their bodybuilding routines.

This study took a closer look at how Tribulus Terrestris affect the sexual performance of male albino rats. Upon the end of the test, it was found that Tribulus Terrestris has a positive effect on the rats’ erections, as well as testosterone and sperm count.

A separate study states that this plant, when used alone, may not be effective in humans as a libido enhancer as it does not affect the testosterone levels directly. However, it was proven that Tribulus Terrestris directly affects the levels of nitric oxide in the body.

Nitric oxide is a chemical compound that is very essential for proper blood flow, especially to the genitals. Therefore, we can safely conclude that Tribulus Terrestris can improve erections even when used alone.

Another study suggested that this plant can be an effective testosterone booster when combined with other medicinal plants. Studies, however, cannot pinpoint how the mixture affects the testosterone levels.

Tribulus Terrestris was used in the past to aid in diabetes. This study was performed on 98 women who are suffering from non-insulin-dependent diabetes mellitus. Some of them received 1000 milligrams of Tribulus Terrestris per day for 3 months.

The supplementation resulted in lower blood sugar and cholesterol levels.

This supplement has also been used to improve heart issues. In 406 cases, it was proven that Tribulus Terrestris dilates the artery. Long-term use of this supplement for angina pectoris is also proven safe and does not cause any side effect.

A study conducted on rugby players found that the plant does not affect the T/E ratio, and the rugby players passed the World Anti-Doping Agency’s urinary T/E limit. Still, the Australian Institute of Sport is against the use of Tribulus Terrestris.