When talking about green tea as a treatment for ED, it’s not about a tea bag immersed in a cup of hot water. Instead, we’re referring to the supplements found and extracted from the green tea. 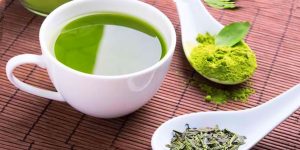 Green tea itself is obtained from the tea plant species Camellia sinensis, or, commonly, the Chinese tea. Its bud and leaves are used to make green tea.

Originally produced in China, this species has grown and spread to several East Asian countries.

Green tea contains several components, which have different benefits; not all are exclusively used for treating ED. They include:

Note, the most useful elements helpful in erectile function are catechins: EGCG and L-theanine.

EGCG is an antioxidant; it protects the body from free-radical cell damage. Free radicals are highly particles that could damage cells. EGCG is also known to reduce inflammation and stress.

Studies have shown that ECCG intake increases erectile function. ED can be due to oxidative stress in the body, and EGCG is among the most potent antioxidants that can solve the problem.[1]

Oxidative stress results from excessive reactive oxygen production, than the body can deal with.

It is an amino acid found almost exclusively in pekoe, oolong, and green tea. It’s most effective in sress-related ED.

Its intake increases the production of alpha brain waves that have a calming effect. It increases alertness and focus alike, and it betters your moods. This has been proven through several tests on both humans and rats.[2]

Popular in the Japanese tea ceremonies, matcha green tea is ground into fine powder, which ensures its antioxidants and nutrients are preserved, unlike regular green tea that features just leaf fragments. Consequently, once mixed with hot water, matcha is instantly ready for use; regular green tea would need two minutes (in hot water) before use.

Matcha tea is grown under special cloths, protecting it from the sun. It’s then given a special post-harvest treatment to ensure optimum potency. Its unique taste is due to a lack of exposure to the sun.

Once harvested, the leaves are steam-treated briefly, preventing fermentation. Then, these are dried and allowed to age in cold medicine, which enhances the taste further.

Compare that to a standard green teacup, of the same volume, and you have only about 35 mgaverage caffeine content.

Additionally, it counters all the side effects of caffeine.

Due to the way it’s cultivated and processed, matcha is more potent than regular green tea, particularly when tackling ED.

It causes vasodilation, or helps relax the walls of blood vessels. This lowers blood pressure, increasing blood and oxygen flow to all major organs, including the penis. Vasodilation makes the penis attain a fuller, harder, and longer-lasting erection.

Matcha tea is best taken half an hour before sex.

Consumption of 2 to 3 cups of coffee daily has shown reduced erectile dysfunction in several tests. Men had approximately 42% fewer chances of reporting ED if they took two to three cups of coffee, daily.

This trend remained unchanged in obese, overweight, and hypertensive men. The results were different in men suffering from diabetes, however.

It is believed caffeine triggers muscular and arterial relaxation in the penis area. This increases blood flow to the penis.

Caffeine is present in tea and coffee, but the concentration is higher in coffee as it’s a more potent drink.

One of the green-tea contents, as listed above, is GABA, also known as γ-aminobutyric acid. It’s known to have several effects, including relaxation. Green tea high on GABA content, known as GABA tea, acts as a sedative, without the risk of addiction, thankfully.

The GABA content is about 400 mg per 100 g of regular green tea. The content is approximately 50 times more in GABA tea, though. Note, consuming GABA tea might make you sleep easily. You could have issues obtaining an erection, too.

Who should avoid Green Tea

It might not be safe treating ED with green tea in patients with the following conditions: