Oysters and other shellfish to treat ED and boost Testosterone

Oysters can help treat erectile dysfunction. This is because they contain high amounts of zinc, which is instrumental in the production of testosterone and maintenance of healthy sperm. 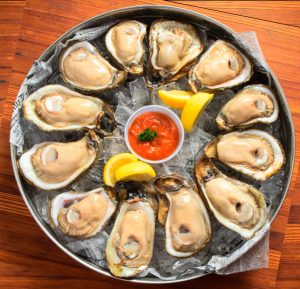 Zinc also plays a pivotal role in boosting female libido. Oysters triggers the brain to release dopamine, a hormone that increases libido in both men and women.

Zinc is an important mineral that the body needs, yet does not produce on its own. It aids DNA synthesis, promotes growth, increases immune function, and so much more.

We can find zinc in different types of foods such as oysters, and supplements. [1]

Reasons to include Oysters in your diet

Oysters are an aphrodisiac. For men, sexual health is greatly affected by the nutrients they consume. Zinc, as mentioned earlier, is used by the body cells to produce testosterone, which increases libido or sex drive.

Zinc is a vital component in the production of testosterone. Therefore, low levels of the nutrient can cause sexual complications, including erectile dysfunction (ED).  One way of increasing zinc in the body is by consuming oysters.

Testosterone is the main sex hormone in men. Women also have insignificant amounts of the hormone. The hormone also acts as a steroid, vital in the development of male reproductive organs such as testes and prostate. [2]

Production of testosterone in the body depends on two key minerals; vitamin D and zinc, which help to streamline mechanism in the hormone’s production.

The hormone’s deficiency may cause depression, weight gain, reduced energy levels, and cause bones to be brittle.

Testosterone levels in a man reduce as he ages. This is the reason many aged men use testosterone supplements to remain active and healthy. The hormone is also instrumental in the production of sperms. Insufficient amounts reduce not only the sperm count but quality too.

Oyster is a rich source of zinc. Including oysters and other types of shellfish in your diet can boost testosterone production.

You can consume either edible oysters or oyster extracts, whichever works for you. [3]

What Other Nutrients are in Oysters?

According to the U.S Department of Agriculture (USDA), one raw oyster packs approximately 5.5mg of zinc. [4]

A half dozen medium-sized oysters contain about 45 calories, 4g of protein, and 1.5g of fat. Remember, however, raw oysters are not ideal for individuals who have compromised immune.

If you haven’t tried out smoked or steam oysters before, they are tasty and contain the same amount of nutrition.

Oysters contain all the nine essential amino acids, including minerals, protein, and omega-3 fatty acids – all of which are essential in keeping a man healthy and ensure the immune system remains activated.

The “sexiness” of oysters maybe because they look like female genitalia. Just looking at them can increase your libido (pun intended).

Iron found in oysters play a vital role in the production of red blood cells, which increase oxygen flow and keeps your energy levels up.

Oxygen and energy are two critical factors that you will need in the bedroom. [5]

From the table above, oysters contain the highest percentage of zinc content per 3 ounces. This means that oysters make the best source of zinc. [6]

How To Eat Oysters?

You can eat your oysters raw, no need to cook. However, you must have pro shucking skills for things to happen and need a special little knife and gloves.

If you have never tried oysters before, they may taste awkward in your mouth. Add some spices or mignonette sauce on the oysters to make them taste better.

Consider steaming your oysters if you cannot eat them raw. Smoked oysters will give you more appetite and taste exquisite when paired with a mini toast and cream cheese.

Cooking does not destroy minerals. However, nutrients can be damaged if they exist in food as fat. This is because fat melts under high temperatures. Sometimes, overcooking may affect nutrient bioavailability. [7]

Should You Chew Oysters?

There is no proper way to eat oysters. How you consume them depends on your preferences. However, make sure you chew at least twice before swallowing.

Preparing oysters at home – Scrub your oysters in chilly running water. But do this when you are about to serve them. Ensure that you have wrapped the oyster in a cloth and that you have a shucking glove. The flat part of the shell should face up, while the hinged section is facing you.

Are Oysters Alive When Eating Them?

Raw oysters are freshly killed or alive when eating them. Leaving them alive for longer makes them safe to eat. In addition, you are less likely to get sick or die if you eat bad oysters as opposed to when you eat contaminated food containing salmonella – a bacteria that causes severe diarrhea.

Eating undercooked or raw oysters may be associated with Vibrio infection, Hepatitis, and Norovirus infection. Symptoms may include diarrhea, vomiting, nausea, severe weakness, and stomach pains.