Smoking after sex is perceived by many as a complementary act, one pleasure taken after another. 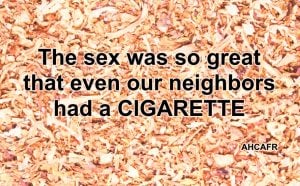 In a survey conducted in 1988, more than 400,000 smokers in the U.S. were asked about their smoking habits. More than half said they smoke after sex.

The main reason is: Smoking feels good after any tiring physical activity. For example, if you go for run, a cigarette after you catch your breath feels almost perfect. With sex, you stack one good feeling after another by smoking.

Benefits of smoking after sex

Habitual post-coitus smokers and even some medical experts cite the alleged “benefits” of the twin acts:

Although the popularity of smoking has gone down amid the persistent warnings on the ill effects of nicotine on people’s health, smoking after sex is still being practiced today. It has even evolved, with some variations in the act:

However, many people, including medical experts, have contradictory views on post-coitus puffing:

Some smokers are stuck on the habit of smoking after sex, and not even the most fearsome warnings of cancer and heart disease risks could apparently stop them. This has confounded tobacco researchers who find no physiological reason why men would want an after-sex puff.

They could only point to nicotine addiction and Hollywood, which once glorified the smoke-after-sex act, as the reasons behind the popularity of this habit.

Some researchers say the habit of smoking after sex has no material link at all and is just the product of Hollywood and the media.

Scenes of Don Draper in “Mad Men,” or Mia Wallace in “Pulp Fiction,” or Anne Bancroft as Mrs. Robinson in “The Graduate” smoking after sex have been ingrained in viewers’ mind. Those movies popularized smoking after sex, says Prof. Robert Proctor.

When then U.S. President Richard Nixon signed into law a ban on cigarette advertising on radio and TV in 1970, the tobacco industry took their big-moneyed PR campaign to Hollywood, resulting in an increase in paid product placement for cigarettes in movies until the 1980s, including scenes showing characters smoking in bedrooms.

This Hollywood PR campaign fizzled out at the start of the 21st century as anti-smoking groups intensified their drive to remove cigarettes in films. In 2015, Disney ordered a total ban on smoking scenes in its films.

With the dangers of smoking now clearly etched in the public’s consciousness, fewer Americans are lighting up, and smoking scenes are no longer appearing in movies.  Moreover, some men who used to smoke after sex now prefer to sleep after the act.

But still the practice persists. Despite the overwhelming evidence on the health hazards posed by nicotine and the massive anti-smoking campaigns, the tobacco industry’s highly successful PR campaign, with the support of Hollywood, to promote cigarette smoking has nurtured a habit that simply won’t go away.

According to the Centers for Disease Control and Prevention, smoking remains as the “leading preventable cause of death,” with more than 480,000 Americans still dying of smoking-related illness every year. It is not farfetched to say that some of them had enjoyed smoking after sex countless times during their healthier days.