NZT 48 Pill: Is it real? What is the closest alternative?

The NZT-48 or Limitless Pill is a fictional drug from the film “Limitless”. This pill does not exist in real life.

In the movie, the protagonist is a deadbeat writer who is tired of being unsuccessful. He was given the NZT-48 pill. It improved his brain’s functions so much that he catapulted his status to the elite 1%.

The NZT-48 supposedly makes you Batman without the traumatic past or Ironman without the shorter lifespan. It is also a tablet that is, unfortunately, non-existent.

Here is the NZT 48 pill scene from the movie Limitless:

Why NZT is downright unrealistic

The NZT-48 is unrealistic because the movie is mistaken about how our minds work. In the film, the pill unlocks the latent capabilities of the brain by making it go into overdrive.

The brain goes beyond its standard power since, according to the film, the brain only uses 10% of its potential, and increasing the percentage used will make you a genius.

Sorry to break it to you, but that is just false. The Scientific American debunked this myth a long time ago.

The inactive grey or dark areas are not “sleeping” but are actually doing important unconscious work. Can you imagine forgetting how to breathe or how to order your stomach to digest? Those “sleeping” neurons are not actually sleeping and are doing very critical work.

Perhaps the clue that is most telling about how NZT does not exist are the so-called benefits of the pill itself.

What were the supposed effects?

The movie stars Bradley Cooper, who plays the character, Eddie Morra. Morra, a novel writer, takes the pill that grants him the ability to fully utilize his brain, which results in him exhibiting extraordinary skills.

Some of the feats that the protagonist of the film had accomplished were the following:

The effects are deliberately exaggerated to draw a clear line between fiction and reality. This also creates a ‘wow’ impact on the viewers.

Why did NZT become popular?

Due to the success of “Limitless” and its exaggeration of the effects of smart drugs, the pill (or more specifically – the brand) has gained widespread popularity and marketability.

Can you imagine being the smartest person in the world? No need to train your brain by reading books or spending a lot of time learning skills. Just pop up a tablet and… voila you are a genius.

You can procrastinate but still achieve more than what any hardworking and talented person.

Read a book? Why read when you can just write one yourself and do a better job than the author?

Distractions, ‘Brain Fog’, and ‘Writer’s Block’ will no longer be terms in your vocabulary.

All of these with just a small capsule.

Since people prefer products that can let them do more with less effort, the NZT brand has become extremely profitable.

The bad news is that the NZT pill just does not exist. Any marketing campaign saying that they are the NZT-48 pill supplier is just morally wrong. Run away from these scammers.

‘Hope’ can be such a cruel thing. Blinded by the desire to be better – unfortunate people are conned into buying fake pills.

The biggest problem with this is not the fraudulent nature of the claims, but the danger of ingesting the marketed tablets posing as NZT pills. Sellers do not disclose the ingredients of the products. Not only will you not get the grossly exaggerated benefits, but also you may be harming your health! 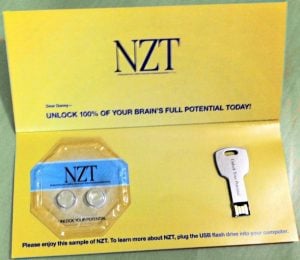 This popularity has led to quite a lot of businesses taking the opportunity to market their products with smart, but morally grey strategies.

For instance, there is a product marketed as the NZT 48 drink mix, using the NZT brand. Another brain-boosting tablet is marketed as MZT-48, which can confuse the buyers. They merely changed one letter (to avoid copyright claims), and they are not upfront about it.

However, just because scams are present does not mean that there are no products or substances that can boost your brainpower.

You can still improve your mental capabilities: take a nootropic.

Nootropics are substances that are used to improve mental capabilities temporarily. They are more commonly known as smart drugs. These substances usually come in the form of a pill or a drink mix, and they are supposed to improve focus, innovation, and all-around mental abilities.

Coffee (caffeine) can be considered a natural Nootropic!

Here is how they work: 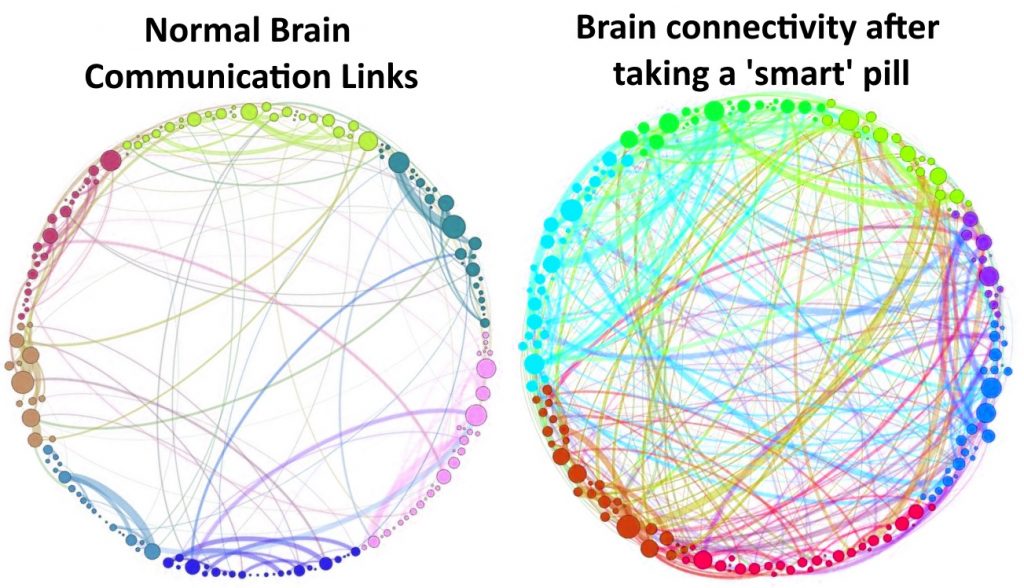 Rather than fixing problems, nootropics improve our capabilities. That is the reason why nootropics are different from prescription drugs:

Nootropics are taken to help with:

Currently, the most popular nootropic drug is Modafinil, but there are plenty of other alternatives. Modafinil is the pill rumored to be where the Limitless Movie got its inspiration.

Initially, this was a prescription drug for those who are suffering from sleep disorders and idiopathic hypersomnia. However, Modafinil is now more popular as a nootropic since it promotes wakefulness. It is also a pill that is effective in making people more focused.

It is not a surprise that United Kingdom’s military is using Modafinil as the pill to manage fatigue during operations, as reported by ABC.

Modafinil’s effects last from 6 to 8 hours, and include the following:

However, there are side effects as well:

In short, Modafinil is the closest you can get to the NZT-48 pill in real life. It can improve your mental abilities, but not to the extent found in the film.

Modafinil comes in both generic and non-generic forms and can be labeled as: Provigil, Modvigil, Modalert, Vilafinil, and several other names.

These are other prescription drugs, so you need a doctor’s note to get them legally.

It is commonly asked: what is the difference between Modafinil and Adderall? They are both very similar, so we wrote a detailed comparison between the two.

An interesting research about German students and another study show that almost 5% of university students have used marketed and branded cognitive enhancers to improve their academic capabilities for their studies.

When people say that drinking coffee in the morning makes them ready for the day, they are not joking. Coffee has been used as a nootropic, especially by writers in the past like the French novelist Honore de Balzac.

Tea not only makes you healthier; it can also make you more alert. It does have caffeine, but not to the extent that coffee does.

Energy drinks contain a big dose of caffeine as well as other additions to improve mental capacity – especially if you are tired.

However, the pressures and stress found today may need more than a shot of Starbucks or a can of Redbull for them to be conquered.

These are drugs that you can legally get online or at pharmacies (legality status differs between countries). There is no need to get a prescription since they are in a sense safer than prescription drugs. Here are some popular brands:

Natural nootropics like coffee and tea do not have immensely adverse side effects unless there are allergies present or are consumed in abnormally high amounts.

Other nootropics sold on the market are usually classified into two: prescription drugs and over-the-counter nootropics.

The main thing to watch out for in prescription drugs is the possibility of substance abuse.

Depending on the prescription drug, it can negatively affect your body with its medicinal effects. For instance, stimulant nootropics can give you excess energy which can lead to ulcers, headaches, and higher blood pressure.

The following are other the common negative side effects:

Prescription drugs, due to their chemical composition, can also target your liver and kidneys. Please take them in moderation and as per your doctor’s prescription.

They have lesser side effects, but they also have lower effectiveness. This means that the side effects are not as dangerous as the prescription drugs.

However, that does not mean that you should not take them without caution. Here are a few known side-effects:

Daily habits that can help

For a better efficiency with your brain, you can do the following:

The NZT-48 pill does not exist, but the nearest nootropic to it would be Modafinil. Remember that Modafinil is a prescription drug, so it is best that you listen to your doctor. Most of the prescription drugs and over-the-counter nootropics have unwanted side-effects, like insomnia and substance abuse.

While nootropics are useful, not a lot of research has been done yet, which makes the said results probable but inconclusive. Always do your research.

Nootropics are great, but maybe in a few years or decades, a real NZT-48 will be present on the market.

The movie was released in 2011 and is inspired by the novel ‘The Dark Fields’. This became a big blockbuster, earning more than $160 million while having a budget of $27 million.

While the film was still under production and near its release, a campaign was launched to improve the movie’s reception to moviegoers. The campaign published multiple professional-looking websites that marketed and sold the fictional medicine.

Several pseudo sites have built a wholly fictional concept behind NZT and pretended that the pill was real. They listed (fake) ingredients, side effects, commercials, and advertisements.

Here is a fake commercial:

However, you could not buy the pills anywhere. Some of the websites still exist until today.

The Problem with NZT

NZT, according to the fake campaign websites, is defined as thallanylzirconio-methyl-tetrahydro-triazatriphenylene. It is alleged as a nootropic drug or smart drug that acts as a psychotropic medication. It is supposed to have the combined capabilities of the following antidepressants:

Even before the movie was created, marketers playing in the smart drug niche have been already working to profit from their respective products. When the film came out, it gave them a huge opportunity to boost their own campaigns and coverage.

Fake social media accounts were created to make it appear that the existing nootropic supplements inspired the movie. Photoshopped messages from real celebrity accounts, including the ones who played roles in the film, were created for clickbait purposes.

Concurrently, many marketers outside the nootropics niche immediately jumped on the bandwagon to cash in a few dollars. They “created” and marketed their own version of the NZT-48 pill all over the web. If you have been attentive to ads and banners of the websites you visited, you may have read about these “limitless” pills.

To improve the marketability of NZT-48 pills, most sellers will claim that the drug does not have any side effects. However, they do claim that you will experience a multitude of withdrawal symptoms when you stop taking the drug. Here are a few:

Manufacturers also do not list proper disclaimers. There are not enough clinical studies or research to back the chemical composition of the pills. There is also the risk of people getting allergic reactions since some of these pills do not list what their ingredients are. Please do your homework before taking these kinds of nootropics. It is always better to get a prescription or to get an OTC nootropic from a reputable brand.