Rhino 7 is a male enhancement supplement designed by a company named Rhino Platinum 7 to target all male sexual issues. This is a fast-acting supplement that can help you have a better libido and erection within 30 minutes.

The manufacturer often pertains to Rhino 7 as a herbal viagra. This product is available in 3000 mg and 5000 mg formula. 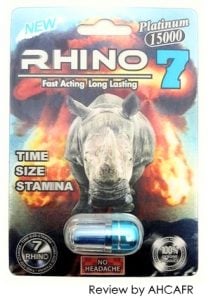 Below are unbiased reviews for Rhino 7. Please leave a review if you have already tried this product.

Took one and felt OK for a couple days, did not notice much.
Took second pill 2 days after taking the first, and have had all sorts of issues since.
Flushed skin, temperature irregularities either hot or cold, weird tingling and other sensations in extremities, heart races for a bit then settles back down throughout day, today is Saturday, last took one Wednesday, still having negative effects.
DO NOT MESS WITH THESE.
SHOULD BE BANNED.

I used to buy these for my husband, and they worked great, but then about a year ago, they stopped working. So we started opening the capsules up and the color and texture of the powder inside varied with every pill. Some had red powder that tasted like chili powder, and some had white that looked and tasted a lot like cornstarch. It's just sad that they lie to consumers. Zero stars.

The first time I took it, it didn’t work. After I took the second pill, it was amazing, and it lasted for days. I don’t walk around with a hard-on all day, but when the time comes, I’m up and ready to go! I feel like I’m 20 again. My girlfriend loves it too!

It also makes my brain feel like I’m young again. I lost that feeling of when I was younger, but now it’s back. I can’t recommend it enough.

Within 2 hours of taking, I got shortness of breath. Few hours in I got a headache and eye aches. It’s been 48 hours of pain now at urgent care. They say they never heard of half these ingredients and I’m having a bad reaction to them. I’ve had an annoying erection as well 90% of the time since taking.

Works great! I get so excited every time I take a pill. Lasts 3 days for me, and totally not bothersome.

The only downside is I get a slight headache and weird vision issues when I take 2 pills in a week.

I have to wait 7 days before taking another dose. But it’s ok considering I could never get a good erection without it. 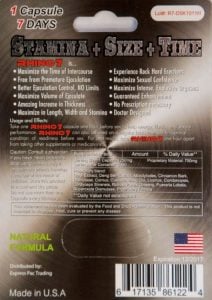 Rhino 7 contains a proprietary blend of the following ingredients:

These are commonly used as supporting ingredients in most male enhancement supplements, but are not usually used as active ingredients as they are not effective enough in helping with men’s sexual issues.

An FDA post reported that Rhino 7 has a hidden ingredient called sildenafil. This is the active ingredient of Viagra that causes the negative side effects brought about by the use of Rhino 7.

Sildenafil is not a safe ingredient for everyone and may counteract with prescription drugs containing nitrates – a common ingredient found in medications for diabetes, high blood pressure and heart disease.

The manufacturers suggest taking one capsule at least an hour before having intercourse. Increased libido and harder erections will be experienced within 30 minutes of taking the capsule.

The supplement delivers better sensation while being able to hold orgasm for a longer time. However, within hours of taking the first dose, headache and dizziness will be felt.

The headache is not severe, but it comes with a blurred vision. The negative side effects will last for a few hours and are not very bothersome for most men. Taking the capsule on an empty stomach will ensure a really hard erection, but will also cause a headache.

To avoid the nasty side effects, you can take half the dose and still experience the benefits. Simply open the capsule and pour half of the powder on water or smoothie. Keep the half dose for your next consumption.

The label warns that Rhino 7 must not be taken with anything that contains nitrate. It is also not for men who have high blood pressure, heart problems, or diabetes. To avoid overdose, only take one capsule every 60 hours.

You may take other medications an hour after taking Rhino 7 to avoid counteractions.

Rhino 7 can be purchased from Amazon, eBay, and a few gas stations like Shell, Mobil or Exxon. It costs around $8 per pill.

Buy only from reputable sellers as there are counterfeit Rhino 7 on the market. 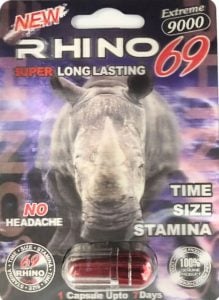 The original Rhino 7 (later renamed to Rhino R Se7en) has been discontinued. However, the manufacturer has released 32 other variants:

These are just different names and packaging but the formulation is still the same.

Rhino 7 can be a temporary relief to erectile dysfunction. However, because of its sildenafil content, the supplement is not recommended as an all-natural supplement.

TekMale is a safer and a more trusted brand for aiding with multiple male issues like low testosterone levels, weak erections, and low libido. Learn more by reading our full review of TekMale.

Listed below are other natural supplements for improving your sexual performance:

If you are looking for ways to increase your penis size, check out our Top Penile Extenders article that discusses the best choices to consider.

Below are older reviews for Rhino 7.

Great value for something that helps with a hard-on. I use it on weekends but not my favorite. It is convenient if you are a party guy and your hobby is to keep a hard on all weekend.

You will definitely impress any girl with this stuff.

Such a waste of money! I bought 5 pills and nothing worked. I followed the instructions and was left waiting, and very disappointed.

There’s not even a tiny tingle down there, nothing! Don’t buy this product, it’s a huge scam!

Most people say it is not safe but I use it on special occasions if you know what I mean. Wife loves it also and can tell when I took it.

Never take it with alcohol, or on an empty stomach and you will be good.

I bought 5 pills, but very disappointed that the 3 pills did not work. It is just annoying that I was not able to get a hard-on when I needed it the most.

It works as described. Take it after a meal to avoid the headache, don’t worry, you’ll still get the full benefit. Also, make sure to drink lots and lots of water.

I would keep buying this instead of the overpriced Cialis. If you take Viagra regularly, this would be a good alternative.

It’s not just a placebo effect

I have been recommending this blue pill to my friends and they agree that this is better than Cialis.

I would have never bought this product but since I was not able to find a physician immediately while staying at a different town, I was forced to buy Rhino 7.

In this town, this pill is sold at $9.99 each. For me, Cialis works within 30 minutes. Rhino 7 takes about an hour to take effect, but the erection is much better.

The packaging says its effects can last up to 7 days – that is a huge exaggeration. Mine only lasts for 4 days but I would often wake up with a very stiff and uncomfortable erection.

I noticed that after taking a pill, the effects are diminishing. The first time of taking the pill, my erection lasted 5 days, now I am averaging 3 days.

Another package label claim is that it can make your size bigger and thicker. This is another exaggeration in my honest opinion. There is no increase in erect size, but on days when I take the pill, I notice a huge increase in flaccid size that I have to actually touch my penis to make sure it is MINE.

But this is just temporary. The size will usually go back to normal after a few days.

For those who want to take this, my advice is to follow the warnings on the label. If you have a chronic illness or taking medication, it would be better to get a prescription from your doctor.

Also, I tried taking another dose just after 4 days and I had the worst headache. I don’t have this problem when taking one pill after 7 days.

I can say that the price is worth it if I just have to take it once a week.

I bought the package that comes with 5 capsules. I only took 2 capsules and threw the rest.

I wouldn’t even want to give this to a friend. This thing definitely works but you can’t be sure what’s really inside.

Just go to the doctor and get a prescription for Viagra if you really need help with erection.

I took one capsule. It works really fast but the headache is not worth it. It is the worst I ever had, and it lasted for 4 days.

I finally went to the doctor and showed him the pack. He said he’s heard of this supplement and that the manufacturers are not honest about the contents of this capsule.

Take it with 2 Tylenol

I had a very nasty headache the first time I took Rhino 7 so the second time, I made sure I drank it with lots of water and 2 Tylenol.

I have the best erections, and I last longer in bed without the headache. Also, don’t take it on an empty stomach.